My first interest in Christian Science was aroused in a curious way. I had known of it for some time, and thought I understood some of its doctrines, but was disposed to regard it as theoretical and visionary—beautiful but leading nowhere.

A pamphlet issued by one of the Episcopal churches was brought to me by a member of the family, which reviewed at some length the various charities which the church supported, and was interested in. Among them, I finally came to the photograph of an interior, entitled, "The Home for Incurables." In that moment, the doctrines which I had regarded as impractical, theoretical, and visionary, came to me with such force that I could no longer elude or evade them. I saw the faces of the poor creatures with the expression of stolid despair that the so-called incurables wear, and the priest in his white robes addressing them, doubtless trying to comfort them. I remember writing on the margin of the page, and it came to me with irresistible force: "What a sad commentary on the efficacy of Christ's teachings—a priest of the church, a follower of Christ, preaching to a home for incurables, and having it still remain a home for incurables." 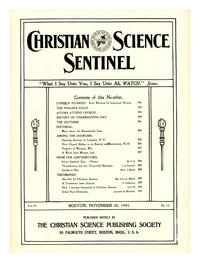