Preach too much, says Mr. Sheldon

THE REV. CHARLES M. SHELDON has recently been in Denver, Col., where, among other things, he attended a meeting of the ministers of the city at the First Congregational Church. He talked to the ministers, and according to the Denver Republican "answered all the questions they could think of asking him." The following is in part what he said:—

"Well, brothers," he began simply, "I thank you first of all for this coming together"—and every listener felt that the speaker really did feel grateful. "I have always felt it was a great advantage to have meetings of ministers." Later, when the questions had begun to come in, he dwelt on this thought, and said he believed in the breaking down the old lines between the churches. "Let the ministers go among their parishioners two by two. It is not a matter of creed, but a matter of life." 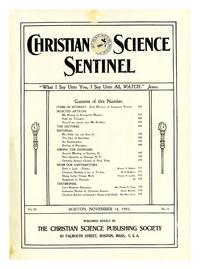