with contributions from W.F. Dutton

Judge William G. Ewing of Chicago, lectured at the Armory Monday evening (June 25) on the subject of Christian Science, under the auspices of the local Christian Science organization. Notwithstanding the extreme heat of the evening four hundred persons, including many of the best people of the city, came out to hear the subject discussed, and they were repaid by listening to a calm, scholarly discussion of a much misunderstood subject. This is the first time local Christian Scientists have appeared before the public and marks an epoch in that organization. The speaker was introduced by W.F. Dutton, who said in part :—

The words Christian and Science, are the two largest words in the vocabulary of the English language, and their meaning, in connection with the mighty movement which they designate, perhaps the least understood. 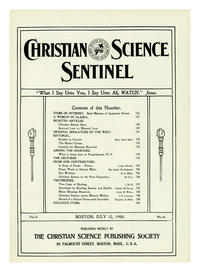