City Hall was comfortably filled last evening (Monday, May 28), when Hon. William G. Ewing of Chicago delivered a lecture on Christian Science. The audience consisted of many out-of-town people, including persons from Boston, Newburyport, and nearly all the surrounding towns. Mr. Ewing is a most able speaker and presented his subject in a clear, straightforward manner that was pleasing to his hearers. He was introduced by Lawyer Robert D. Trask.—Haverhill Evening Gazette.

The introductory remarks of Mr. Trask were in part as follows:— 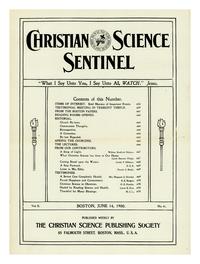