The peace envoys of the South African Republic and the Orange Free State were officially received by Secretary of State Hay May 21. They made a plea to the government to intervene between the two Republics and Great Britain in the interests of peace. Secretary Hay, on behall of the President declined to intervene, on the ground that the United States had gone as far as it could, in the character of a friendly neutral power, to bring about a settlement of the war. They called on President McKinley May 22 and received the same answer to their petition. It is stated that the envoys will travel through the country endeavoring to arouse a sentiment in favor of their cause. Mr. Fisher is reported to have said: "We expected that our proposition would be received by the State Department in just the way it was, therefore, we are not surprised or discouraged. Our mission to America has just commenced, and we are confident of accomplishing that for which we came."

The millious of people who have frequent occasion to transmit sums of money under five dollars through the mails are at present without any cheap and convenient means of doing it. A bill is now before Congress to remedy this state of things. This bill, known as the post clerk money bill, provides that all treasury notes and coin certificates now in existence shall be replaced by notes and certificates of similar style bearing on their face blank spaces for use as checks when desired. Under ordinary circumstances these bills are to circulate as currency, with the space left blank. When the holder of one desires to transmit to another person the sum represented by his note or certificate, he writes after the words "pay to" the name and address of the payee, and sends the paper, which has now become a draft on the treasurer of the United States, by mail. 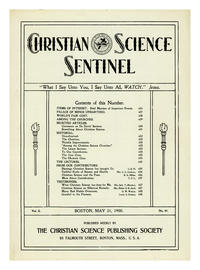