The Democratic and Populist state conventions in Nebraska last week adopted platforms which are almost identical. They re-affirm the Chicago platform, declare for free coinage of gold and silver, "16 to 1," oppose a large standing army, denounce the action of the Republican party on the Porto Rico tariff bill, declare against trusts and imperialism, and favor the income tax and the choice of United States Senators by popular vote. It is said that the platforms, though not written by Mr. Bryan, were submitted to him for approval, and that they are to be taken as his announcement to the nation of the platform upon which he desires to stand as candidate for president. Mr. Bryan addressed the conventions and was received with great enthusiasm.

Immediately upon the signing of the new finance bill by the President, the process of substituting the new refunding bonds for the various outstanding bonds began, and over one hundred and twenty-five million dollars worth have been changed. The great majority of bond-holders who are turning in the old bonds for the new ones are national banks, which expect to take out circulation up to the full amount of their holdings, and a considerable addition to the currency is assured. 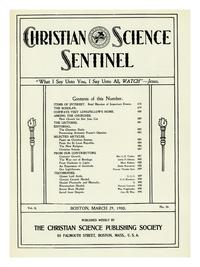