Grand views in hiking and healing

When I sought healing in Christian Science, the spiritual adventure that followed brought me closer to God.

Living in New Zealand, I’ve enjoyed many hiking and cycling trips through all kinds of mountain and forest terrain. These journeys have demanded thorough preparation, a clear sense of direction, and a determination to keep going in sometimes tough conditions. But whatever the challenges, I’ve been greatly rewarded by these adventures and strengthened by the lessons learned along the way.

Spiritual healings can be like that, too. When I sought healing in Christian Science for what seemed to be a threatening illness, the spiritual adventure that followed brought me closer to God and taught me much about my real identity as God’s reflection.

In 2019, I experienced chronic intermittent pain along with other symptoms. Rather than get a medical checkup, as people of my age group are frequently advised to do, I chose to call a Christian Science practitioner for metaphysical treatment. I’d had many healings through prayer over a number of decades, so I was confident that I would be healed this time, too.

The pain was not debilitating, so I was able to carry on with my normal activities, including teaching, playing tennis and golf, and serving as Second Reader for my branch Church of Christ, Scientist.

As with a hiking expedition, I felt the need to know I was on the right track and making good progress. This meant listening for God’s guidance. I made a point of praying several times a day, both the Lord’s Prayer and the “Daily Prayer” (Mary Baker Eddy, Church Manual, p. 41). I also studied and worked with many of the wonderful resources The Mother Church provides, including the weekly Bible Lesson outlined in the Christian Science Quarterly and the inspiring articles in the Sentinel and The Christian Science Journal.

When my wife and I needed to make a long drive, we spent the time listening to Sentinel audio programs, which can be found on JSH-Online.com. The many testimonies of healing we heard were reassuring. We also played hymns from the Christian Science Hymnal. This calmed my fear and proved to be a great source of inspiration and joy.

Christian Science teaches the importance of conquering fear. In Science and Health with Key to the Scriptures, Mrs. Eddy writes: “Always begin your treatment by allaying the fear of patients. Silently reassure them as to their exemption from disease and danger. Watch the result of this simple rule of Christian Science, and you will find that it alleviates the symptoms of every disease. If you succeed in wholly removing the fear, your patient is healed” (pp. 411–412).

I was so grateful to replace fear of disease with the certainty of my spiritual perfection as a child of God, created in God’s likeness. I also took great strength and comfort from the healing of the Shunammite woman’s son described in Second Kings in the Bible. The mother had such faith in God’s care for her son that when asked if everything was well with her and her family, she replied, “It is well” (4:26). Even in the face of evidence that her son had died, she remained steadfast in trusting God.

I felt a wonderful sense of the unreality of sickness as I read, “The physical healing of Christian Science results now, as in Jesus’ time, from the operation of divine Principle, before which sin and disease lose their reality in human consciousness and disappear as naturally and as necessarily as darkness gives place to light and sin to reformation” (Science and Health, p. xi). I was grateful to affirm that God is totally good and does not create evil of any kind. Another inspiration came one night when I lay awake thinking of the Beatles’ song “All You Need Is Love.” I felt enveloped in God’s love and care.

Although there were signs of healing taking place, several times the pains and other symptoms would disappear only to return several days later. At these moments the practitioner helped me deal with discouragement, assuring me that God doesn’t take us halfway and then abandon us.

As with many of my treks, there were difficult times. Hiking has taught me that when the going gets tough, I need to persevere and trust that I am making progress. I was determined to follow this instruction in Science and Health: “Stick to the truth of being in contradistinction to the error that life, substance, or intelligence can be in matter. Plead with an honest conviction of truth and a clear perception of the unchanging, unerring, and certain effect of divine Science. Then, if your fidelity is half equal to the truth of your plea, you will heal the sick” (p. 418).

At one point I found myself wanting to study the chapter in Science and Health titled “Animal Magnetism Unmasked,” as well as several articles in the Christian Science periodicals on dealing with animal magnetism—a term Christian Science uses for matter-based thinking that turns us away from God. It became clear to me that I needed to completely dismiss from thought any sense of a power apart from God and to know that my life is governed solely by God’s law of harmony.

After almost a year of prayerful work, the symptoms disappeared suddenly and completely, and there has been no return of the problem since. I am deeply grateful for the blessings I received during this healing, including the practitioner’s dedicated support along the way. Like treasured memories of grand views encountered on a hike, the glimpses of God’s goodness that unfolded to me and the spiritual lessons I learned continue to enrich my life. 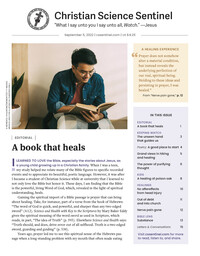