Healed of reaction to poisonous plant

When I was a young adult, my family moved house next to a large, undeveloped parcel of land. This beautiful little wilderness was lush with trees and thick underbrush, and I enjoyed hiking through it often.

One day I noticed what looked like insect bites on my ankle. At first I paid no attention to them except to scratch the ankle occasionally. But as the affected area grew, it was evident that I had been exposed to some type of poisonous plant in the woods. The condition continued to worsen, so I contacted a Christian Science practitioner to pray with me about it. Eventually the rash spread to my entire body and was very painful. I could barely move and was confined to bed.

Since my family was unable to care for me, they took me to a nearby Christian Science nursing facility, where I was put into a nice, quiet room. The facility was peaceful and filled with a sense of joy and hope. The Christian Science nurses never once commented on the physical condition. They saw me as God’s perfect, spiritual man. I felt this clarity and joined them in accepting this truth about my real identity as God’s spiritual expression, whole and healthy, and rejected as a lie about me the evidence of harm presented by the physical senses. I also listened to recordings of the weekly Bible Lesson from the Christian Science Quarterly and of Science and Health with Key to the Scriptures by Mary Baker Eddy.

Each morning I was taken in a wheelchair for a bath. On the third morning I noticed that dead skin was flaking off, exposing fresh new skin. By the end of the week, I was completely healed and able to go home.

Shortly after I returned home, an area on my inner thigh began to swell. It appeared to be an infection. While very painful, it lasted only about a week, thanks to further Christian Science treatment. However, it did leave a mark on my thigh, which I jokingly told myself was a badge of honor for having gone through the poison plant experience.

One day several years later, I happened to notice the mark after showering. I remembered that this had been a Christian Science healing and that the condition had been proven to be a lie about me. I recalled that the Christian Science nurses and practitioner saw me as a spiritual idea that had never been touched by poison. Days later the mark on my thigh was completely gone—no trace of it at all. I am very grateful for Christian Science. 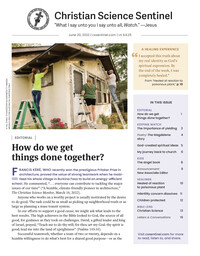