I was playing in a college rugby game and collided with one of the girls on the other team in an attempt to win the ball. I heard a loud crunch from my nose, and the swelling and profuse bleeding that followed indicated it might be broken.

The team doctor, pointing to a bone that had broken the skin’s surface, said, “You’ll have to have your nose set.” Others on the sideline told me how bad it looked. I was upset by these reactions and completely convinced that my nose would never be the same. 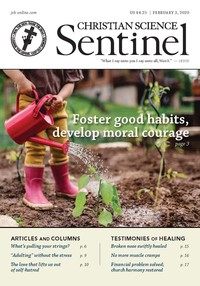