Healing after a bicycle accident

Shortly after a very heavy New York City snowstorm in January 2016, I was riding my bike to the Christian Science Reading Room when I was struck by a car and knocked down. The bike and I were pushed for a few feet before the driver could bring her car to a stop. She had hit a slick patch of melting ice.

Immediately, I reached out in thought to God and felt safe, calm, and cared for during the whole incident. I expected to jump up and walk my damaged bicycle back home but discovered that one knee was unable to bear any weight. I called my husband on my cellphone, and he said he would head over right away. But the driver, seeing my need, invited me into her car and delivered me to the front door of my apartment building, where we met my husband. 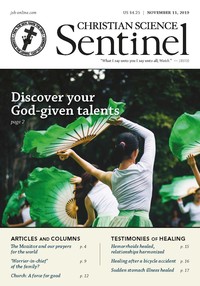