I have given the name to all the Christian Science periodicals. The first was The Christian Science Journal, designed to put on record the divine Science of Truth; the second I entitled Sentinel, intended to hold guard over Truth, Life, and Love; the third, Der Herold der Christian Science, to proclaim the universal activity and availability of Truth; the next I named Monitor, to spread undivided the Science that operates unspent. The object of the Monitor is to injure no man, but to bless all mankind.

Why should a person diagnosed as having an incurable disease read a Christian Science magazine?

Sometimes when things seem bleakest, you need a friend. For my family, that friend was the Sentinel.

Decades ago, my grandmother was suffering with a painful neurological condition pronounced incurable by the doctors she consulted. At the same time, my mother—a teenager at the time—was told by specialists that she would lose her sight within a few months. Both women were healed by the radical spiritual ideas they found in the pages of the Sentinel. 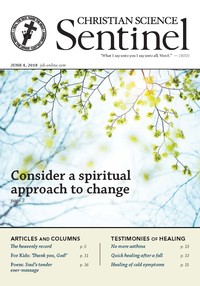