Recently I was waiting for my sister in a restaurant about an hour from my home. She was running late, and as I sat down I realized that 17 years earlier this was the restaurant where I had celebrated my tenth wedding anniversary. It was not a happy occasion as it had become apparent that my husband was no longer invested in our marriage. He shared that his girlfriend had recommended the restaurant we had dined in that night. We separated shortly after that evening.

Now, 17 years later, I sat in the very same booth that we had sat in on that earlier occasion, and yet I no longer felt the anguish of earlier days. Instead, I was bathed in gratitude for the spiritual growth that had taken place over the years, and for the healing I experienced after the divorce of feelings of fear, rejection, failure, and of feeling unloved. The spiritual growth occurred by drawing closer to God. I was helped by studying the Scriptures and the writings of Mary Baker Eddy, and through the loving support of Christian Science practitioners. 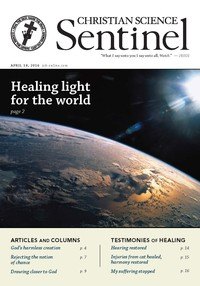