The year before Christian Science came into my life, I left a full-time teaching position to stay at home with my infant son. For several years, I had had a recurring physical problem, which greatly intensified during this period. After many tests, I was diagnosed with severe food allergies and was forced to completely abstain from many kinds of foods. It was almost impossible to live normally. I couldn’t go out to eat, as I had to know exactly what was contained in everything I ingested. I prepared normal meals for my family, but was unable to eat much of it.

I pursued many kinds of alternative healing therapies, various diets, and vitamin therapies, including naturopathic and other treatments. With each of the treatments I would feel relief and think I had solved the problem, but the improvement was always temporary and would not last for more than a few months. In addition, with each trip to the doctor the list of food allergies grew and grew. I became very alarmed. 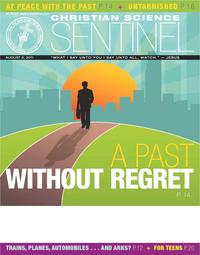