AFTER SEVERAL WEEKS spent in South Africa earlier this year, observing preparations for the International Football Federation's 19th quadrennial World Cup tournament, I concluded that the "rainbow nation" was open to a rallying call like this one delivered years ago by the Sentinel's founder: "One infinite God, good, unifies men and nations; constitutes the brotherhood of man; ... fulfils the Scripture, 'Love thy neighbor as thyself'; ..." (Mary Baker Eddy, Science and Health, p. 340).

Between June 11 and July 11, 32 soccer-playing countries will compete in ten stadiums in nine cities, each team, with their supporters, bringing their own culture to South Africa's already diverse cultures. The final in the Soweto stadium near Johannesburg is expected to have a worldwide television audience of over 715 million. 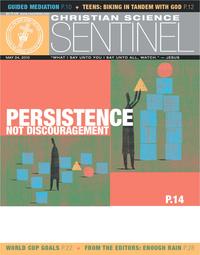