[This article was written by Mary Baker Eddy in 1910. Its message is of vital importance to every Christian Scientist today.]

The following is reprinted from the Christian Science Sentinel, September 1, 1917:

THE NATURE AND POSITION of mortal mind are the opposite of immortal Mind. The so-called mortal mind is belief and not understanding. Christian Science requires understanding instead of belief; it is based on a fixed eternal and divine Principle, wholly apart from mortal conjecture; and it must be understood, otherwise it cannot be correctly accepted and demonstrated. 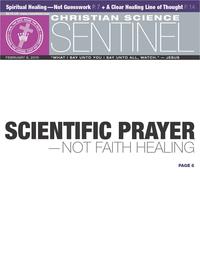