TO TRULY 'SPREAD THE WEALTH'

IN THE EARLY 1990S, when the the United States was going through a recession, I'd decided to expand my computer business. This apparently came at exactly the wrong time, as the economy was grinding to a standstill.

For my company, this meant no new sales and very little income. My wife had her hands full taking care of our three young children, and I was constantly figuring out which bills to pay and which I could let slide for a while. We were able to cover most daily expenses, but the mortgage on our home went unpaid for several months. After three months, the bank began to call frequently.

Mark Strickland lives in California with his wife, Susan, three kids, Katelyn, Jeff, and Scott, along with their two dogs, Bear and Belle.

Send a comment to the editors
NEXT IN THIS ISSUE
Article
'TRUST IN THE: LORD AND DO GOOD' 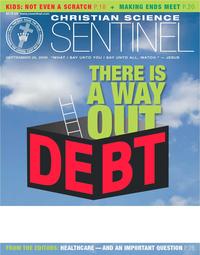