Riding the economic roller coaster over the past year or so, we've all watched the markets fluctuate wildly and received a glut of financial news that's been better one moment and worse the next, that's sometimes confirmed the experts' predictions and other times confounded it. Dollar amounts have been routinely spoken of in terms of trillions. There has been a steady stream of stories about outrageous corporate bonuses, bailouts, and bankruptcies. In short, a world economy in crisis has dominated the headlines for months.

But of late, people have ventured to speak in slightly more hopeful tones. To be sure, there's still plenty of caution. But also, glimmers of optimism have begun to break through. One recent Christian Science Monitor article, citing various signs of an improving economy, reported that if indeed the rate of economic decline is diminishing, as some feel is the case, "it could mean the longest recession in US history is beginning to bottom out" (March 18, p. 1). 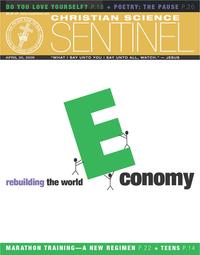