WHICH TEAM ARE YOU ROOTING FOR?

RECENTLY, PHILADELPHIA PHILLIES pitcher Jamie Moyer told me that instead of working to be better than others, he just focuses on being a bit better than he was in his last game. No wonder he's enjoyed such an extraordinarily long and successful career!

Now, that's an approach I'd recommend to all the participants in this year's best-of-seven World Series baseball playoff between the champions of the American and National Leagues, which begins later this month. Especially, I might add, since players from Korea, Australia, Canada, Puerto Rico, Japan, Venezuela, and many other countries now compete on American teams, so that the World Series really is beginning to live up to its name.

Mark Swinney, a former third-baseman, is now a Christian Science practitioner and teacher. He holds classes in Albuquerque, New Mexico. 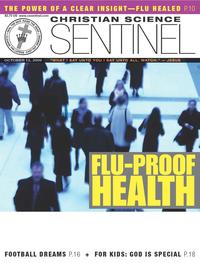