WHEN THIS COLUMN focused on Pakistan's parliamentary elections in the December 10, 2007, issue, it noted that those running for office, including Benazir Bhutto, who had been greeted with a suicide bombing attack when she returned to Pakistan, could be in physical danger from attempts to disrupt the election.

But it was still startling to learn of Mrs. Bhutto's assassination just weeks before the election. Since then, parts of Pakistan, especially Bhutto's home province, have experienced periods of chaos, rioting, and violence. News reports suggest that there is more to come, especially in the face of the government's decision to delay the election until February 18. Although Pakistan's government has asked the United Kingdom's Scotland Yard to conduct a thorough investigation of the assassination, many feel that these efforts are unlikely to produce answers that will unite people and bring healing. 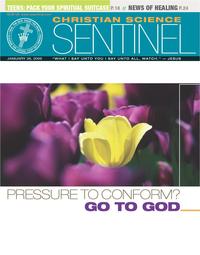