One day a few years ago, I noticed a small lump on my back while looking in the mirror. Initially, I thought it was a spider bite and didn't think too much about it. Weeks later, after noticing that it was still there, I became somewhat concerned. Having been raised in Christian Science, I knew that prayer could heal problems. But, because there was no pain and the lump seemed like just an inconvenience, I decided to "live with it."

Months later, and quite suddenly, it grew larger and became inflamed, causing me a great deal of pain. Though I had witnessed many healings in my family throughout my life, I hadn't exactly been practicing or studying Christian Science over the previous year. I knew I had a decision to make regarding how to deal with this problem. I could seek medical treatment, or rely on Christian Science. Quite frankly, I didn't know what to expect medically, but I did know that I wanted a sense of dominion over the fear I was experiencing. So I decided to rely on Christian Science treatment for a solution to this situation. 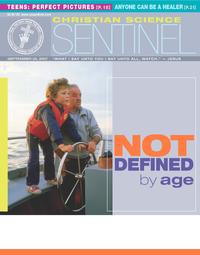