A reason to rejoice

Recently, my heart rejoiced at a news report that came out of Africa. In the 1980s, an Ethiopian farmer, a man named Zumra Nuru, founded a village in the northern part of that country based strictly on the equality of men and women. In this village, Awra Amba, men can be found staying home to cook, and women spend their days plowing the fields. Women and men work side by side. Their community has become so popular that many other people want to join it. Ambassador Tim Clarke of the European Union was quoted as saying that it is "the model for the world community on how gender issues should be treated" (The Christian Science Monitor, "In Ethiopia, one man's model for a just society," August 21, 2007).

Women today have made great progress in surpassing gender stereotypes and following their higher callings. Despite the continued struggle for equality in many parts of the world, these advancing steps are encouraging. 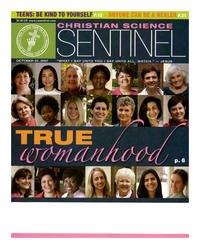