NO FEAR FOR THE RISING GENERATION

THE FIRST REPORTS that evening shook me. A chemical bomb attack had been launched on a civilian center. I held our infant son tighter in my arms and cast a glance at our threeyear-old daughter playing on the floor nearby. Even though the events were unfolding an ocean away, I found myself blinking back the tears of a surging sorrow and feeling of helplessness. All I could think was, "What kind of world are we bringing these children into?"

By the time I tucked them both into bed, I was positively hollow with fear for the unknown dangers their lives would be exposed to. The only place of refuge I could find that terrible night was in prayer. And for an hour or more, I was half praying, half pleading to a divine ear that those in the news would be cared for. And that those under my own roof could grow up safely. 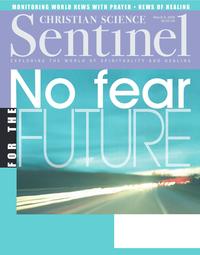