AWARE OF DIVINE LOVE IN IRAQ

few people living in the United States on September 11, 2001, will ever forget that morning. Certainly I won't. By 10:00 a.m., lobbyists, lawyers, government officials, and policy wonks were pouring into the streets of Washington, DC. Television images of planes crashing into office towers had already oozed into American consciousness. The dark cloud rising from the Pentagon across the Potomac River confirmed that terrorism was not just happening in New York City.

As I joined the crowd walking through Farragut Park toward the subway, my strides quicker than usual, I looked back at the White House. The sky above was a deep blue and wide open. I shuddered at what I imagined coming through it.

Keith Collins is a writer, editor, and communications consultant in Washington, DC. 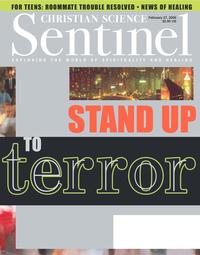