MY SEARCH FOR THE TRUE GOD

LIBERIA has a unique history among the countries of West Africa. Settled in part during the early 19th century by freed African American slaves, Liberia became a constitutional republic in 1847. In the late 1980s, when civil unrest already was on the rise in Liberia, two Christian Scientists, one of them an employee in the United States Embassy in Monrovia, the country's capital, met Liberian citizen JAMES LANGFORD. Along with a few others who were interested in Christian Science, they began holding public services. When rebel forces moved into the city in 1990, the embassy officer and his wife, as well as most other non-Liberians, were forced to evacuate. Though constant grit, and grace, James Langford, who remained, survived more then a dozen years of the war's notorious fighting and atrocities.

This past summer, Robert Press, a political science professor at the University of Southern Mississippi and former Africa correspondent for The Christian Science Monitor, spent two months in Liberia on a research project. His wife, Betty, a freelance photographer and photography teacher, accompanied him on the project. There, Bob and Betty met James and his family. Together they helped revive public Christian Science worship services in Monrovia. When Sentinel editors learned of this activity, they asked Bob to interview James. Bob brought James's manuscript back to the US, and comments recorded in his interview have been used to supplement James Langford's own account of his search for truth and a PEACEABLE HOMELAND. 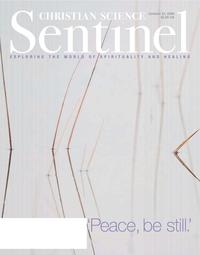