GETTING FROM NEVER ENOUGH TO ABUNDANCE

GLEN LAUDER may have earned his phD in the down-to-earth field of geomorphology, but this New Zealander's favorite view of Earth is the small blue orb that astronauts see on space missions. From that perspective, there's no doubt we're all linked, interdependent. A natural scientist who is also a Christian Scientist, Dr. Lauder applies systems thinking to address local and global challenges, facilitating discussions within and between communities. He's seeing how his spiritual practice—which restores well-being at the individual level—can be applied to the planet's systemic challenges. Senior Writer Warren Bolon talked with Lauder about poverty and the environment.

IT'S HUMBLING even to talk about something so vast as global poverty. So I've been disciplining myself to observe how poverty seems to arise even in the presence of plenty. Poverty is when in this moment we feel we don't have enough. The chronic experience of that thought is persistent poverty. I walked through a store here in Boston today and saw all the appliances on sale, all the advertising. People are being confronted each day with the thought, I don't have enough. The more stuff you have, somehow the more stuff you want. Although some might call that spiritual poverty, it doesn't actually have a name; it's just that feeling, moment by moment, that I don't have something I need. That's the most sense of poverty, which can block out an awareness of the needs of others, and of what the world's calling us to and be. 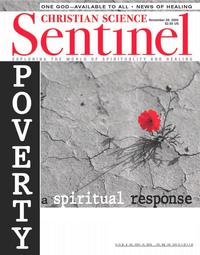