I wanted to rely on God

Injuries from a car accident are healed completely through prayer alone.

It was my first week in a new position at a technology firm. I had just finished a meeting with a client and was driving back to my office in a torrential downpour. As I was making a left-hand turn, a car that was coming toward me didn't stop at a red light. It came crashing into the front passenger door of my car with such force that my car spun around almost 360 degrees and flipped on its side. I was wearing a seat belt, but I was thrown from the driver's seat against the window of the passenger's seat.

After being knocked unconscious briefly, I remember coming to on an ambulance stretcher when I felt raindrops on my face. I heard the paramedics tell me I was lucky to be alive, and that I had a lot of broken bones. They assured me not to be concerned because there was a hospital across the street.

Cadi Nones is Founder and President/CEO of The Arcadia Group LLC, an international management consulting firm headquartered in Chicago, Illinois.

Send a comment to the editors
NEXT IN THIS ISSUE
CHURCH LIVES
Life without church? Unimaginable! 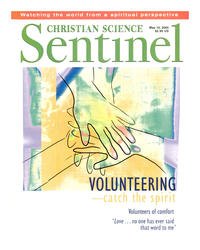