As the Palestinian people look toward elections in January, they and the world are facing new opportunities for peace in the Middle East. Yassir Arafat's vision of a Palestinian homeland did much to shape the dialogue on that subject, but the interim government and the candidates for election can now explore new paths toward peace.

Is this time of transition fraught with peril? No question about it. Much prayer and careful thought are going to be needed. And Mary Baker Eddy, who had to make her own way along tricky paths, offered sound guidance for others on the subject. She wrote in Science and Health: "The discoverer of Christian Science finds the path less difficult when she has the high goal always before her thoughts, than when she counts her footsteps in endeavoring to reach it. When the destination is desirable, expectation speeds our progress" (p. 426).

Rosalie Dunbar is the News & Special Projects Editor for the Sentinel. 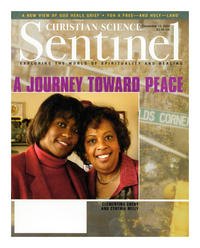