YOU ARE not WHAT YOU EAT

Obesity has hit epidemic proportions in the United States and in other countries where the demand for junk food has been growing—and it's become a major health problem. Doctors now say obesity is the cause of a variety of serious illnesses. Surrounded by cheap, easily available fast food and prepared, packaged products, many of us have become addicted to eating unhealthy foods—or simply to eating too much, according to media reports.

Overeaters admit they often use food to compensate for feelings of loneliness or low self-esteem. But this out-of-control syndrome only feeds hopelessness and depression in those who feel trapped in debilitating eating disorders. Not only adults, but an ever-increasing number of children, are becoming obese at younger and younger ages. Without adults to teach and enforce good dietary habits, children are consuming greater amounts of junk food while often exercising less and less. And their health is showing the results.

Cindy Neely is a public speaker on spirituality in the Boston area. She also practices and teaches Christian Science healing. 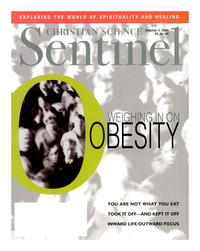