Science and Health brings healing and transforms a young life

When I was 14, I became very ill and was hospitalized. After numerous tests and examinations, I was diagnosed after about three weeks with toxic shock syndrome.

During the time that I was in the hospital, I was on life-support in the intensive care unit, being fed intravenously. My heart had failed, and one lung had collapsed. At one point, the doctor told my mom that I was being kept alive only by medication, and that it didn't look as though I would get any better. 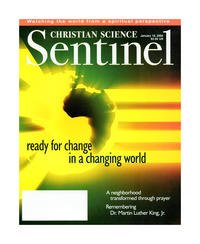