'The work of God is PEACE'

Two men—one Muslim, one Jewish—search for peace as a way of life.

Neve Shalom/Wahat al-Salam ("Oasis of Peace" in Hebrew and Arabic) is a village in Israel where 50 Muslim, Christian, and Jewish families live together (see "City on a hill—a torch lighting the darkness," April 21, 2003, Sentinel). Recently two former mayors of the village stopped by the Sentinel for a conversation about peace.

Abdesalaam Najjar, a Palestinian born in the village of Arrabe, was raised in an orthodox Muslim home. He has lived in Neve Shalom/Wahat al-Salam for 22 years. He and his wife, Aishe, and their four children still live in the village.

Marilyn Jones is a senior writer for the Sentinel. 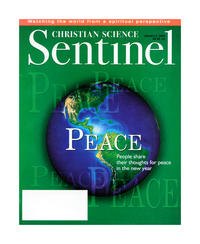