The earth moved ... BUT GOD DIDN'T

I Woke Suddenly around three in the morning. I was away on vacation in Hawaii, and something was wrong. I realized everything was shaking. It was a small earthquake. I had never experienced an earthquake before, and it was a little unnerving. Where I live in New York, earthquakes are rare and often so low in magnitude that few people would even notice them.

This earthquake was unsettling, not because of the danger but because something I took for granted changed. The earth was supposed to be stable, solid, unmovable. It's not that I didn't know about earthquakes. I had just never experienced one before—and so I expected the ground under my feet to stay still.

Richard Bergenheim is a contributing editor. He lives in Brooklyn, New York. 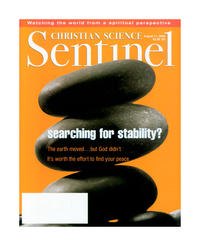