It was solitude in a raw, pure form—midnight guard duty at one of Fort Hood's 1st Cavalry Division motor pools. Just me and those hulking tanks and APCs, and the welcome cool night air. By one of those specific graces of military life, I had been routed to that central Texas outpost the size of some small countries, instead of into combat thousands of miles away. Why? Why me?

If anyone approached the motor pool, I was supposed to call them to a halt and ask, "Who goes there?" I know, sounds like a line out of The Sands of Iwo Jima. But even if those moments were a mixture of thoughts about the meaning of existence and breakfast, my constant companions during my last few months in uniform were variations on that standard sentry's question. Who am I, anyway? Where am I going? Who really does go there? Not on this path around a chain-link fence, but on that uncharted road rolling outward within my imagined space and time. 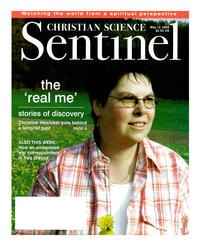