A couple of years ago, I discovered a mole on my back. I had heard warnings many times that these things can be serious and that people should always have them checked out to make sure they're benign. However, over the years, I've learned through studying Christian Science that when I become anxious about something, I can turn to God to gain peace of mind. I've learned to pray so that I really get an idea of what God is—that God is Love. And further, I pray to realize more fully that I am a reflection of God, as the Bible tells me I am (see Gen. 1:26). By praying this way, I understand that God alone controls my whole life. I've come to see that God is the Principle of my life in the same way that in mathematics, there is a principle that governs the numbers.

Even though I'd been aware of the mole for nearly a year, I think that, more than praying about it, I was so afraid I just buried my fear by ignoring it. However, when the mole began to grow, I realized I had to be more serious in dealing with it. I began to pray more earnestly and study the Bible and Science and Health more deeply. That's when the idea of God as the governing Principle of my life came to me. I began to think about my relationship to God as being similar to the relationship that numbers have to the principle of mathematics. In fact, this passage in Science and Health became the foundation for my prayers: "In Science man is governed by God, divine Principle, as numbers are controlled and proved by His laws" (p. 318). I began to think about myself as being a concept much as a number is a concept—in that both of us are governed by our Principle. I thought about the number three—realizing that the concept of three can never be altered—and that nobody and no event can change the identity of three. 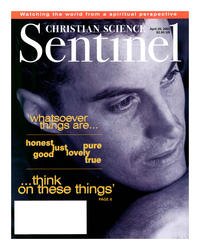