Safe when exposed to contagion

My Neighbor Had Just Called To Tell Me that her daughter had chickenpox. Their doctor said that the day she spent playing with my children was the day that she was the likeliest to infect others. There had been lots of physical contact, as all the children played together in a small playhouse mixing up "concoctions" of seedpods and water and grass. They'd also eaten lunch together.

That medical prediction began to weigh on me heavily, and I was concerned that my children would come down with chickenpox. But prayer was there to help us all—not unlike the way it had helped people in Bible stories I knew, which teach important spiritual lessons for all time. There are comforting instances in the Bible of people who were directly exposed to communicable illness and, despite physical contact, never became sick, because of prayer.

Janet Clements is a Christian Science practitioner. She lives in Beverly, Massachusetts. 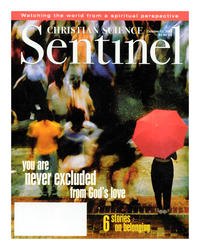