To be a force for good

Sometimes the progression of society into a more spiritual environment can be seen in the life of a single individual.

Take, for instance, John Coltrane, who in the 1950s and '60s took jazz into realms way beyond the norm of that period. "Trane," as he was affectionately known among his fellow musicians and fans, also transformed his own life—kicking a heroin habit and then dedicating his life and music to the God he felt had delivered him. J. C. Thomas, in his book, Coltrane—Chasin' the Trane, said this about Coltrane's determination to overcome his addiction and move forward with his life: "With God's grace, he believed, and his own determination, all things were possible. His readings in religion and philosophy had convinced him that he should now cleanse himself of physical and psychological impurities and dedicate his music to God, in whom he believed with increasing involvement each passing day" (p. 83). 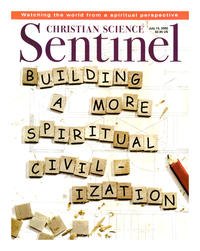