My generation—what the world needs from us

College sophomore Alistair Savides of Pretoria, South Africa, has thought deeply about the responsibility he and his peers have in bringing a better, more stable future to the world. Alistair shared ideas with Suzanne Smedley of the Sentinel that are excerpted here.

My generation has a chance to make a real difference in the world. And it probably won't be on a largescale political basis. We have seen many things handled politically and militarily—with both negative and positive consequences. We've heard of many things that are degrading to humanity in so many countries—so many examples of catastrophes. But we've also seen many wonderful things. 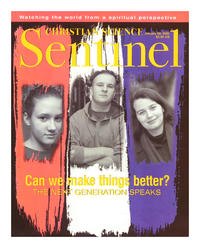