We were living in the north of Brazil, and my husband traveled a lot on business. I was often alone with our two children, and my younger child, Virgilius, who was two, had many health problems. Since I had to decide for myself how to care for him, I took the boy to the doctor, and we began a long series of examinations and tests, in three different cities.

The diagnosis, unfortunately, was always the same: leukemia. I was told that with the treatments they could offer, Virgilius would live, at the most, to the age of six. 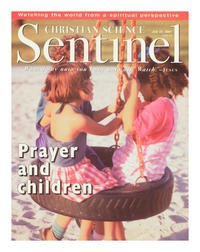