This isn't a regular "Kung fu" type martial arts movie where the characters' mouths talk out of sync with the dubbed English voiceovers. In fact, this is a karate movie for people who don't even like karate.

In this fantasy set in 18th-century China, the characters are magically able to defy gravity and glide through bamboo forests, or skim along the rooftops of Beijing, where much of the story is set. The surprisingly non-violent action sequences—an exquisite blend of fluid gymnastics and ballet-like movement—are so breathtakingly choreographed that the makers of the film The Matrix will be scurrying back to the drawing board before doing the sequel.

Stephen Humphries is a writer for The Christian Science Monitor and occasionally reviews movies.

Send a comment to the editors
NEXT IN THIS ISSUE
Article
CREATIVITY: WHAT MAKES THE DIFFERENCE? 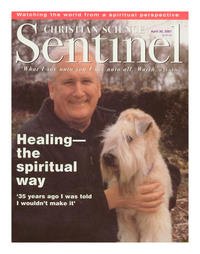