A wall comes tumbling down

On Thursday afternoon, February 22, 2001, several hundred people gathered in below-freezing temperatures on a snow-encrusted lawn in front of the Christian Science Publishing House in Boston for a historic moment. They witnessed the first blows in the metaphor-ripe demolition of a 15-foot garden wall at the site of the future entrance to the Mary Baker Eddy Library for the Betterment of Humanity. Announced by The Christian Science Board of Directors last June at the Annual Meeting of The First Church of Christ, Scientist, the new Library facility is scheduled for completion by June 2002.

Virginia S. Harris, Chairman of The Christian Science Board of Directors and President of the Trustees of the Mary Baker Eddy Library, was joined on the platform by the other Directors. Also present were Library Trustees Walker Jones, Treasurer; Don B. Wilson, former Archivist of the United States; Allen Weinstein, President and CEO of The Center for Democracy; and Peter Ackerman, Managing Director of Crown Capital Group, Incorporated. 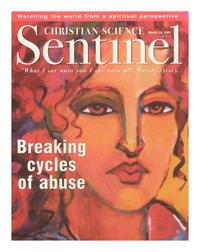