I FIRST heard about the attack on the World Trade Center in New York City on the radio, as I was leaving for a short field trip with other students in my high-school art class. The details of the explosions and panic were overwhelming, and by the time I reached the site of our class I was deeply shaken. As other students arrived, I told them what I had heard. A few of us had friends and relatives in Manhattan, and we were worried about them. So we tried to reach them on a cell phone. They were safe. And, more or less reassured, we began to work.

Through the morning, I tried to keep in mind God's love for all the people involved in this overwhelming event. I eventually stopped shaking. Every time I felt panic, or began growing agitated, I would tell myself that things were being taken care of, not only by the emergency personnel, but by God, whose control of every situation is complete and unceasing. 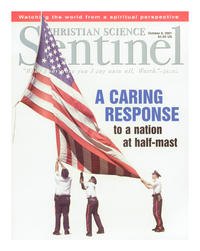