Don't let the bugs bug you

One Beautiful Summer morning I had an experience with some real live ticks—the kind that live in the woods and attach themselves to warmblooded animals in order to feed on them. I had gotten up early, looking forward to an organized hike in a nature preserve.

When I arrived at the starting point, however, I found a grim-faced leader. He had been told that the area was heavily infested with ticks. There had been numerous newspaper and radio reports about the dangers of being bitten by these tiny insects, and concern about the diseases they transmit. Several hikers had already called the leader the night before to say that they were dropping out. And when we arrived at our trailhead, another four people decided not to continue. 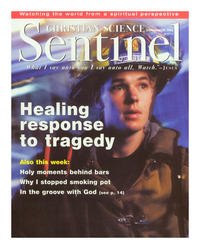