God is talking to you right now.

What are angels? Are they the ethereal beings with wings, halos, and little cherubic faces that we sometimes see depicted on statues, pins, ornaments, and tree-toppers? Angels are messages from God. When we listen to these angels, they deliver real blessings to us.

But how do we recognize the thoughts God is sending us? There's the old joke about the man who was warned to abandon his home because of rising flood waters. He said he'd trust in the Lord and stay right where he was. Pretty soon, the water reached his front porch, and the authorities sent a motorboat to rescue him. He refused to leave, still maintaining his trust in the Lord. Shortly thereafter, however, he had to climb up on the roof because of the high water. At that point, a helicopter came to carry him to safety. Again, he refused to abandon his home and stayed on the roof. The flood eventually covered his house, and he was swept away and drowned. At the pearly gates of heaven, he asked the Lord why He hadn't saved him from the flood. The Lord replied, "Well, I first sent you a warning, then a motorboat, and finally a helicopter. Just how much help did you want?" 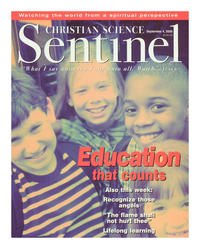