As the fireworks of the last Independence Day of the second millennium flashed over the Charles River between Boston and Cambridge, I wondered about the Fourth of July in the early nineteenth century. Freedom of expression and freedom of religion were emerging among the European settlers in the Western world, beginning in the northeastern region of the United States.

In that new atmosphere of liberty, a young girl was freeing her thought from restrictive religious doctrines. Born in New England in 1821, Mary Baker Eddy, the founder of this magazine, was educated within the parameters of Puritan teachings, where tacit obedience to God was normal and expected. She knew and love the Bible, and was reverently eager to comply with God's will. 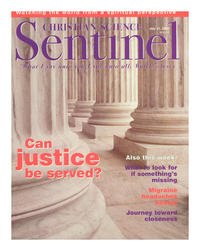