YOU'VE SEEN Val Kilmer as an actor. You've seen him as Simon Templar in The Saint (". . . going from sinner to saint, that's a real journey"). You've heard his voice as Moses in the animated film The Prince of Egypt ("[I have] had some great material to work with in my career but nothing ean match The Prince of Egypt"). You've seen him portray a blind man in At First Sight ("Well, it's a love story, and I love the quote from Mrs. Eddy that 'Love never loses sight of loveliness'  Science and Health, p. 248. . . . when you look at a story like this, you come to discover there's more at play in our daily lives than just what the senses tell us").

In this week's issue of the Sentinel, though, you'll see Val Kilmer in a somewhat different role. You'll meet him as someone who deeply values his ongoing relationship with God. And that relationship, he explains in his article "Acting lessons," hinges on really listening to God—and then acting on what he hears. 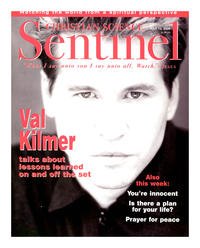