The First Commandment is at the heart of this work.

with contributions from Ryder Stevens

RYDER STEVENS IS a lieutenant colonel in the United States military, and the deputy EUCOM chaplain. EUCOM, located in Stuttgart, Germany, is the headquarters of the US European Command, the joint command over all Army, Navy, Air Force, and Marine forces. Ryder is among those responsible for the United States' military relations and exercises in 89 nations, from Finland to South Africa. He has a master of divinity degree and has been a US Army chaplain for 20 years. He has worked in combat areas three times. Ryder plays a crucial role as a peacekeeper, bringing to his work a deep conviction of God's power and God's government of His creation. The Sentinel talked with him about the spiritual standpoint he brings to his work.

What do you see as the most fundamental need in peacekeeping? 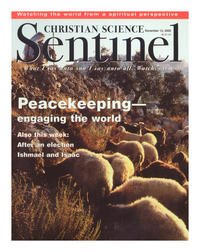