So much for self-pity

HAVE YOU EVER felt sorry for yourself? Indulged in a little harmless self-pity? Maybe even held a pity party? I have. In fact, when I went through a divorce some years ago, I became particularly adept at the game. I refined the technique so efficiently that whenever the feelings of loss and sadness were building up, I would look at my watch and say, "I will give myself ten minutes of self-pity and then get back to the business at hand."

Even after I remarried and began to study Christian Science, I occasionally lapsed into a "woe is me" mentality. I never did anything to stop it, because I did not see it as a habit that should be healed. I took it merely as a signal to deal with the sense of loss, setback, or whatever situation triggered the mood. 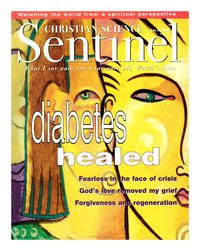