"I watched with intense gratitude as the military regime gave way to a civilian government without further bloodshed."

Although I lived in Europe, it was a country a thousand miles away that held my attention at one time. The country had already experienced a horrific mass execution during an earlier period of political turmoil. Now people were regularly "disappearing" at the hands of the ruling military regime. A book I read and a movie I saw about the nation's difficulties intensified my feelings of helplessness, futility, and deep sorrow. 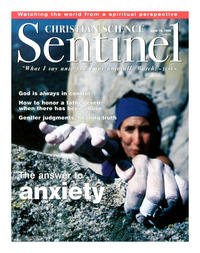