Several months ago I experienced severe back pain that appeared to be the result of some yardwork I had done. I sought and received treatment from a Christian Science practitioner. One idea that came out of our discussion was the fact that there was no way that a back problem could be the result of doing good work. Another was the whole issue of fear.

It became clear to me that I feared the intense pain that I thought would occur every time I moved. In retrospect, I can see that this fear was totally an illusion of mortal mind and could not exist, since God is Spirit and one of the qualities that man reflects from Spirit is movement. It is impossible that the expression of a quality of God (movement) could cause someone pain. Once I recognized that I was letting the fear of the pain keep me from moving, I was able to move and become functional again, even though the pain didn't immediately disappear. 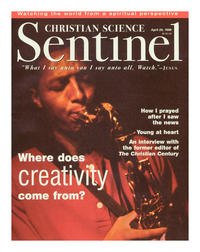