"I have marked paragraphs and articles to share with my first-grade son."

As I read "Help, my child is out of control" in the September 20 Sentinel, I received such a comforting mental picture. It describes a mother who for an entire semester went to school to be with her child, who was having difficulty paying attention and getting his work done. After school hours she would sit by his side reading Science and Health while he did his schoolwork.

The patient, persistent, expectant love that she expressed reminded me of the Shunammite woman—the prophet Elisha's dear friend in the Old Testament. Her son had died, and after she took him and put him on the bed that she and her husband had provided for Elisha when he traveled through their part of the country, she began walking to find the prophet (see II kings 4:18-37). Regardless of who asked her about herself, her family, or her son, she replied, "All is well." She was patient, persistent, expectant, and her son was raised from the dead.

Send a comment to the editors
NEXT IN THIS ISSUE
Article
TRYING TO Reach US? 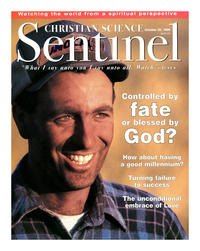