In about 1961, a friend of mine faced many problems that were similar to mine. Then a change seemed to occur in her life—it was less chaotic and solutions were appearing. "What has happened to you?" Her answer was, "Christian Science."

When I attended a service with her, a man there who knew me gave me a copy of Science and Health with Key to the Scriptures. A few days later I called him, saying we needed to meet. I yelled at him for about two hours! Having been raised in a religion where one could be sent to hell and burn forever, I had a terrible fear of God. God needed to understand I was reading this book, not by my choice, but because I had respected the person who gave it to me—and the louder one shouted, the better one could be heard by God! 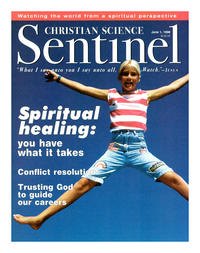